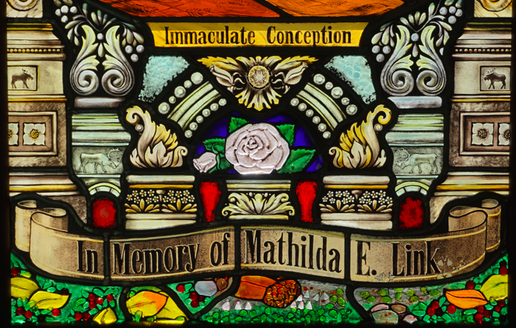 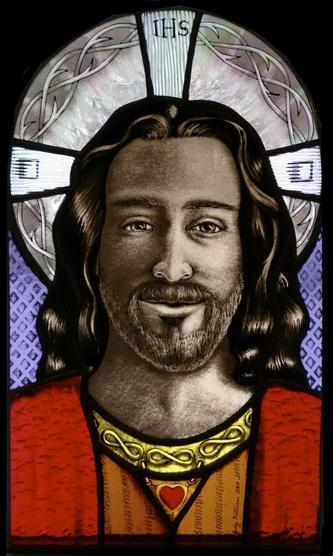 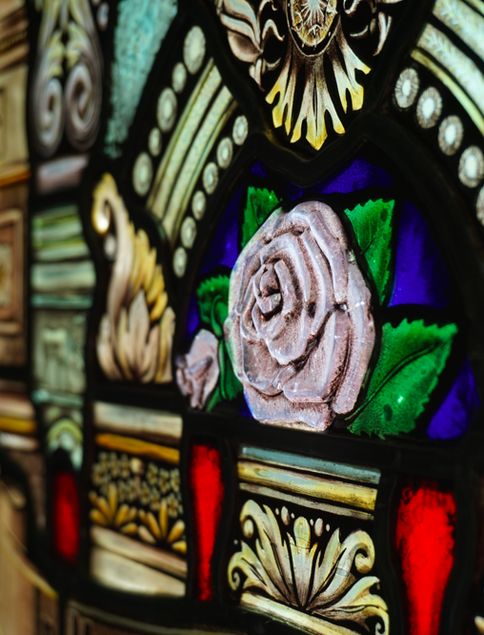 The Eucharist brings new life, so it was placed in the Springtime window. 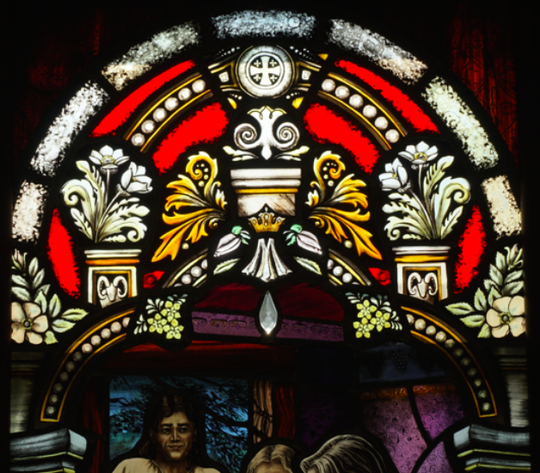 St. Terese wanted to spend her heaven doing good, like rose petals falling to the earth. It was her little way.

The native people in this town depend on salmon for their circle of life, so the fish were used in this symbol of the Trinity. 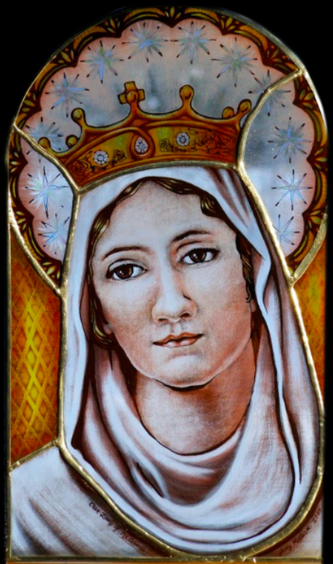 Collaborative church window project with Debbie Matthews at Expressions in Glass in Fairbanks, Ak, for St. Theresa's Catholic Church in Nenana, Alaska.   Debbie was given very rough drawings from a parishioner. She added some ideas to them. I drew the designs from those drawings and then painted the heads, hands, and words. Debbie did all the rest of the work on these lovely windows. I really like her frame design. They give the windows plenty air movement to prevent frost damage.

"Jesus and His Mother, Mary"

Since these windows would not be painted all over I used mostly lines and very little shading on the skin.

​The darkness of winter is such a big deal that I placed good crystals to bounce rainbows around the room during those low sun winter days. 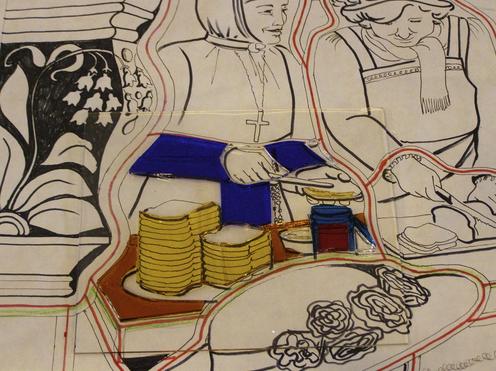 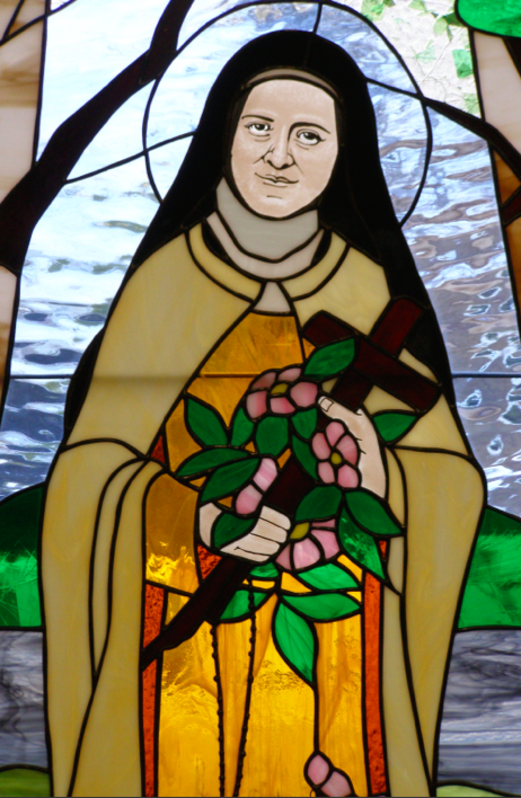 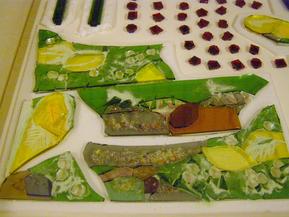 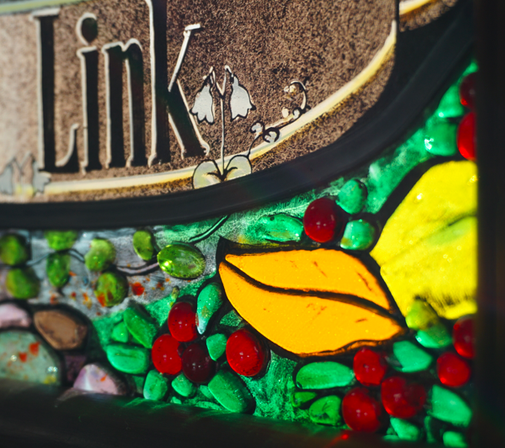 Our Lady of Mount Carmel with the Child Jesus.

​In St. Teresa's writings she asked to be a ball for the child Jesus to play with. Thus the Ball in the window.

​In the Style of the existing windows,  but I replaced the Roman flora with Alaskan flora and fauna. 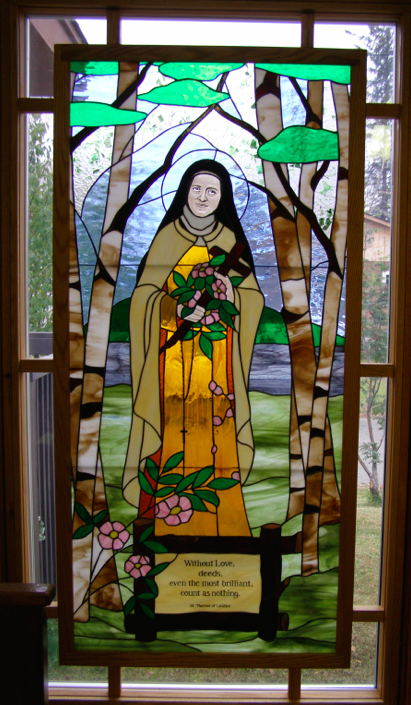 ​To get the tiny bits of bright colors in a single piece of glass, I fuse them together in my kiln, then paint them with black or brown and fire them again. Some can take 7 firings to finish.

Some of the pieces were left raised or contour fused, Like the berries and rose.

This lovely winter photo of Immaculate Conception Catholic Church was taken by Matt Moberly. You can see this photo and so much more at: 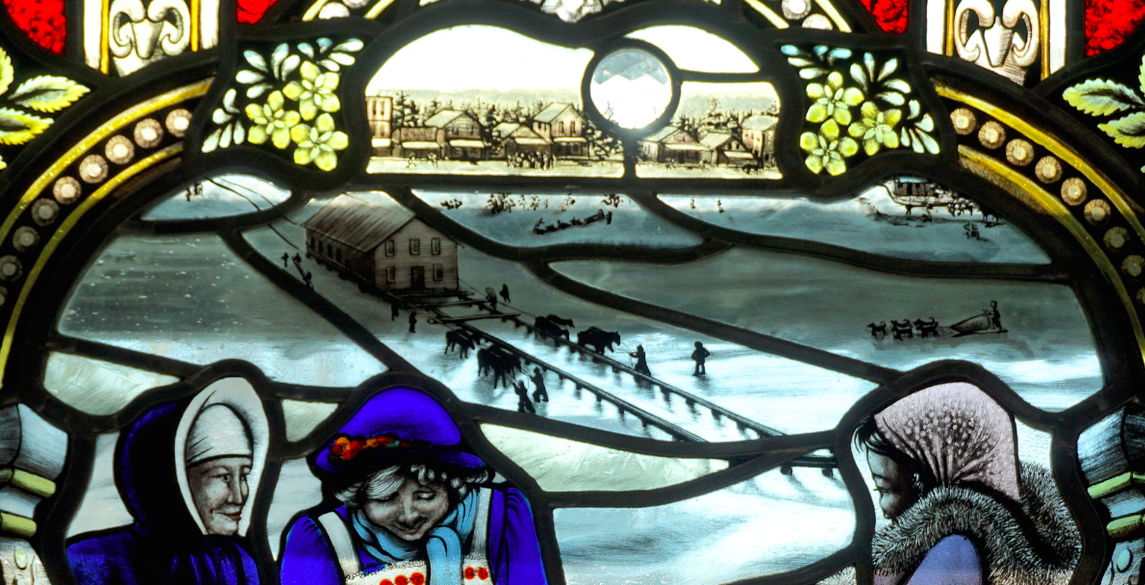 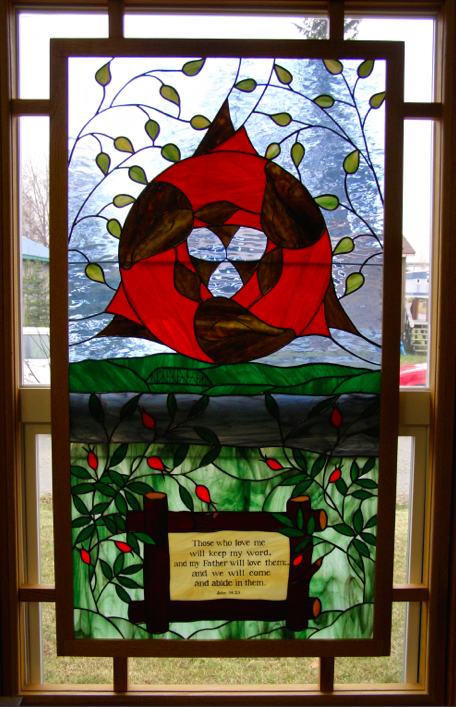 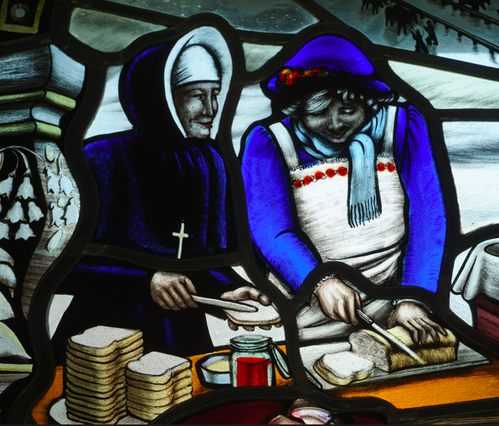 This is the oldest church in Fairbanks. It has very nice Meyer of Munich Style windows in it's Sanctuary, sadly there is no signature on any of the windows. I wanted to keep to this style for the 2 new windows that were being added to the entry area on each side of the front door, but also add many elements of modern fusing techniques and local themes in the canopy of the design.

The church wanted one window to Honor the Pioneering Women of the early parish. So I chose to tell the story of the moving of the church across the frozen river in 1911. The second window depicts a family scene of Mary, the Immaculate Conception, making bread with her mother. Her father visits with them and Joseph, the neighbor boy, who stands outside the window because he is not married and part of her family, yet. She is making bread, later Mary brings forth the Bread of Life. And in the other window the women are serving the bread to the workers moving the church across the frozen river.

The Gold Rush started in 1902 and the church was built in 1904 on the south side of the Chena River. St. Joseph's Hospital, staffed by the Sisters of Providence of Montreal, Canada, was built in 1906 on the north side of the river and a little ways west of the Church. This was hard on the priests attending the sick and offering daily Mass there, so Father Monroe decided to move the church closer to the hospital. He hired contractors to move the building from Dunkel St. to the Chena River. The contractors wanted to build a bridge to cross the river, but Father decided that was too expensive so he fired the contractors. He then cleared the new building site, excavated for a hall basement, and built the hall foundation.

(From the History of Immaculate Catholic Church   http://www.alaska.net/~icc/history.html)

"The river was only about six feet deep and the ice was strong enough to support horses, so Father Monroe proceeded with his plan. He drew lines on the ice about thirty feet apart, running diagonally across the Chena. Then about every eight feet he inserted poles into the ice, hammering them down into the mud at the river bottom. They were supported in such a way as to remain upright, then were left there to freeze in.  With the onset of the extreme cold the poles were set. Then they were trimmed evenly to about two feet above the surface of the river. Planks were balanced on them for the four hundred feet which the building would have to be rolled to the other side of the river.
It was quite an event when the church was moved. Bets had been placed as to its success or failure (with the odds moving toward failure). Everyone in town turned out to watch! The movement across the ice was very simple. However, when the spot where the church was to rest was reached, there was a distance of some twenty – five feet to lift the church up the bank. A roadway was cut out of the bank with a somewhat steep grade. Then there was the added lift to the foundation. Father Monroe took the precaution of adding another cable to the building to give it support up the grade and on the lift to its foundation. Some thought that this was as unnecessary expense. It turned out that Father was wise in his decision, for just as the church was to be placed on the prepared foundation, the old cable broke. The new cable held and saved the church and workers from harm.
In 1914, the roof of the church was changed, and the ceiling was raised five feet. A choir loft was added, and a belfry was erected in the front part of the church... In 1926, Father Patrick O’Reilly, S.J., enhanced the beauty of the “little church” by the installation of its exquisite stained glass windows." (From the History of Immaculate Catholic Church   http://www.alaska.net/~icc/history.html) 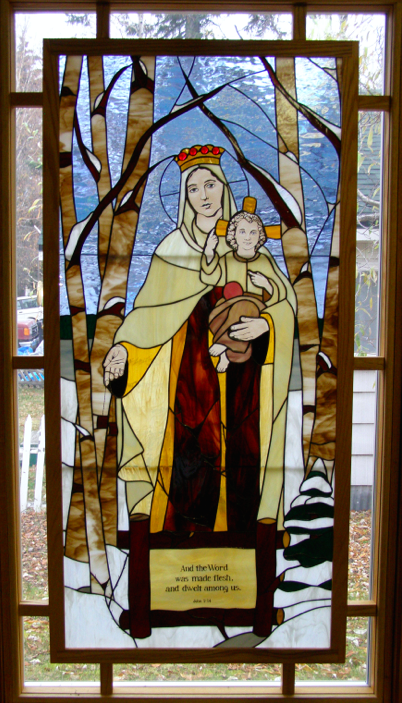 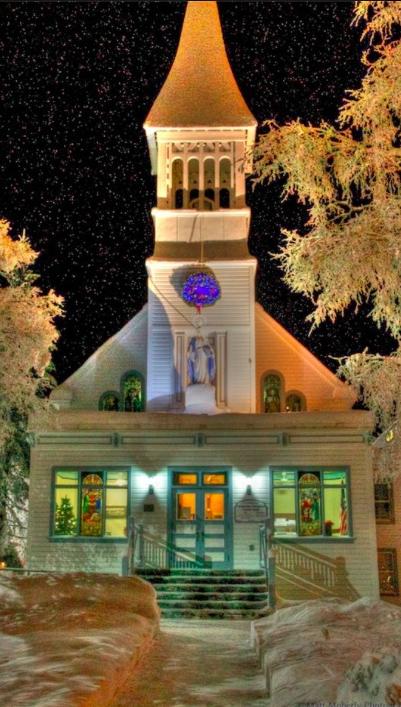 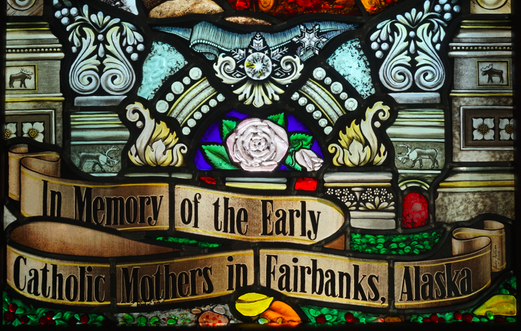 These images may take a few seconds to load depending on your technology. 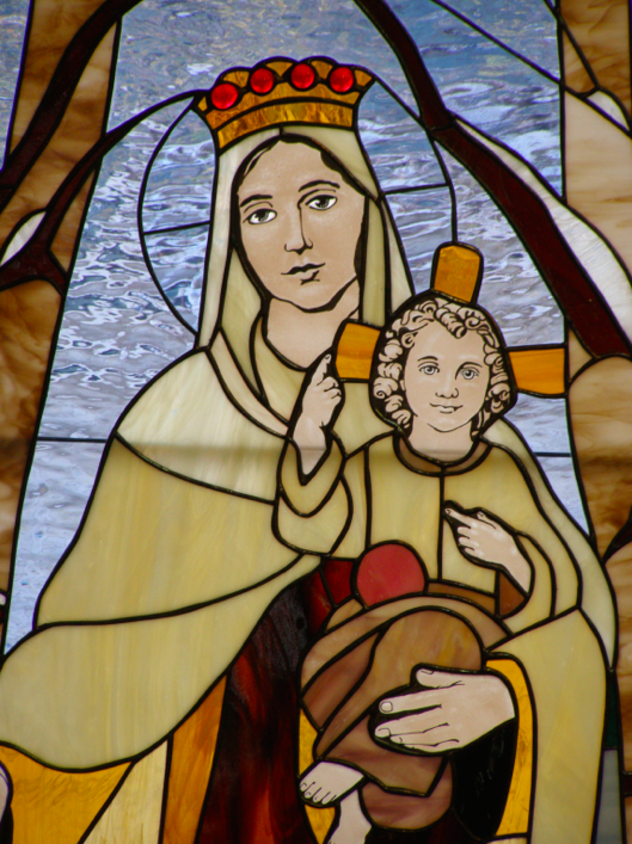 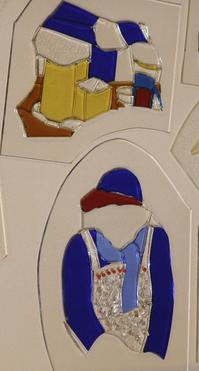 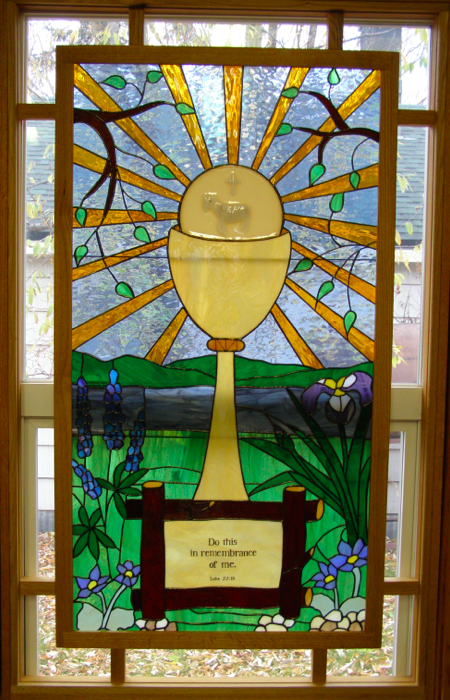 I love the story of the church crossing the river. I helped move a smaller cabin this way in 1986, my first art studio. I know how everyone turns out for a winter event during that one hour the sun comes over the horizon. I can see the gamblers betting it will fall in the river and the Sisters on the other bank praying it will not .